This year was not a good year for Nepal indeed. It all begun by the worst earthquake in the last century, followed by a massive decrease of incoming tourists. Finally, neighbouring India blocked the border, and the poor land remained paralyzed without fuel, gas and other necessary resources. Our expedition visits the country mainly for one purpose: we want to announce the good news to the world: no worries, it is safe to come.

FlyDubai company is a real jewel among the world-class, low-cost companies. Not only they do not give you the water for free, but when you are about to watch the movie to shorten the seven-hour flight, a message appears which asks you to place your beloved Visa to the screen and let you grab an interesting amount from your account. I intentionally walk through the plane during both flights and sum up: from Prague to Dubai, one man is watching something, apparently an Arab sheikh, from Dubai to Kathmandu there is, of course, no one. It makes together some eight dollars profit and about four hundred pissed off passengers who put the company website to their personal blacklists. During the top management business meetings, they had to use some strictly illegal substances in the hookah. There is no other logical explanation. 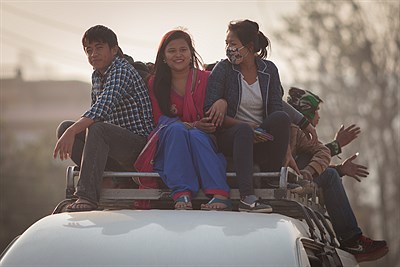 We arrive at Kathmandu airport in the late evening and get to the centre of the city before midnight. The whole town is enlightened by a single slightly damaged glimmering fluorescent tube. We put on our headlights and start searching for accommodation. In the far distance, we see a little glow coming from under the roller curtain. I push it up, and yes, we are in the guesthouse reception. They have free room (all of their rooms are free now) and let us sleep there. In the morning, while arranging some bureaucracy, we find out that we are probably the only foreigners left in the country. We spent the afternoon searching for working ATM and van to the starting point of the Annapurna circuit trek. The drive lasts nine hours, and there is only one stop for lunch. I'm happy that we have a chance to buy food just like local people in a completely non-touristic local dirty and ugly place, but the rest of our expedition starts to eat before I have a chance to ask for the price, so there's not much space to bargaining left. Finally, we overpay the usual price about ten times, and the locals from our van have a fun of us for the rest of the trip. Only one gentle lady feels sorry for us and offers accommodation in Besisahar. She leads us to the room of her fifteen-year-old daughter who explains us with her perfect English the economic and political problems of modern Nepal. 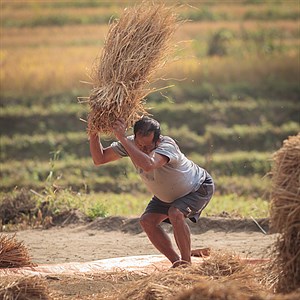 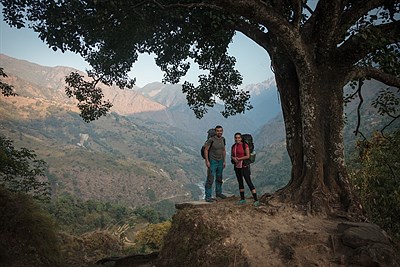 We almost always walk alone during the first part of the trek. We meet exactly 27 foreigners during the first four days. The number of visitors dropped off up to 80% after the last year's snow storm and this year's earthquake. We were afraid to walk in an endless chain of people, but in fact, we feel almost depressed walking solely through the villages where no one stayed for the night in the last few weeks and watch the sad eyes of local people dependent on tourists. At least, we try to choose always worse lodges to split our money to less popular and poorer places. 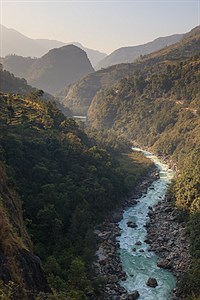 Children love to be photographed as everywhere else in Asia, but this year they show strange modern gestures copied from social networks, which ruins the ethnic atmosphere of the photos. We punished them by not giving them any chocolate. The local animals also show the most extravagant creation this season. 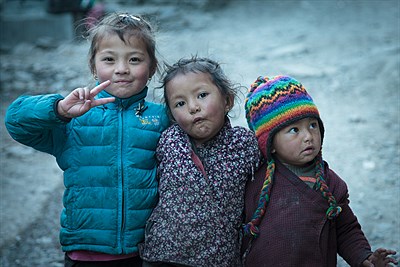 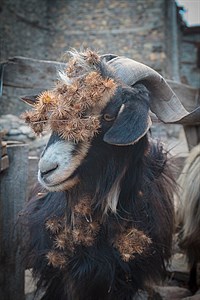 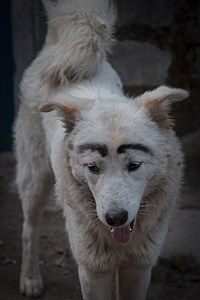 As the valley of the Marsyangdi river rises slowly up and becomes wider, we have more and more chances to see fantastic views to six and seven thousand peaks covered with eternal snow. We also pass the vegetation layer of a forest with incredibly huge trees, entirely unknown to us. We arrive at one of the settlement hours after sunset, and we find out that there are no lodges there, only a huge apple farm. Fortunately, we can take advantage of the hospitality of the farm owner from Kathmandu, who arrive to manage the plantation of thousands of new trees and who lets us overnight in the apple storehouse. We get over three thousand, and there is a first tough climb to Ghyaru village, almost 800 meters in a short yet steep ascend. We are overtaken by a super shaped girl from Denmark followed by two completely exhausted guys from Switzerland and Mexiko. As we understand after some time, both poor boys fell in love with her and have no chance but to follow her on the trip. A few days later we meet the threesome again: the guy from Mexiko has horrible flu, but does not give up and prepares in secret the murder of the other, stronger rival. 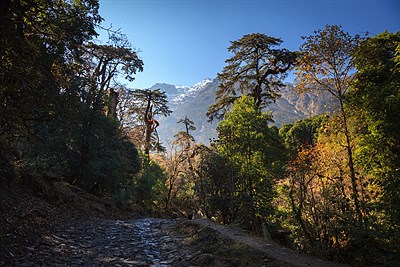 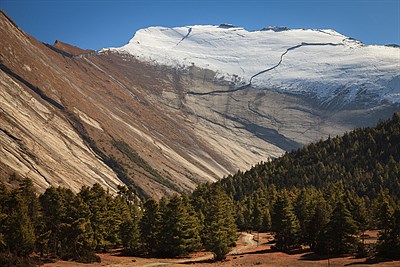 From Ghyaru, we follow the contour line few hundred meters above the valley base. The main ridge of Annapurna massive forms on the opposite side. The views are breathtaking, as much as they should be in Nepal. The sky is very attractive every morning and evening, but it is surprisingly hard to compose any pictures as there are no dominant peaks around. 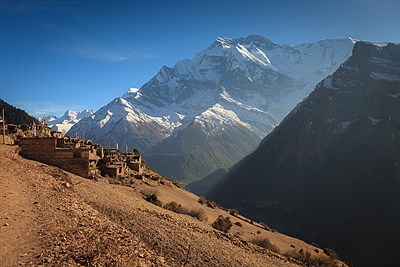 Arrival to Manang is a disappointment. The village is an ugly, dirty, half abandoned sleepy hollow lost in the mountains. The only attraction of it is a triplet of cinemas, repetitively projecting all American movies showing some adventure followed by some sort of death in Himalaya. You can make a lot of side trips from Manang, and we choose the hardest one to Tilicho Lake, one of the highest lakes in Himalaya. 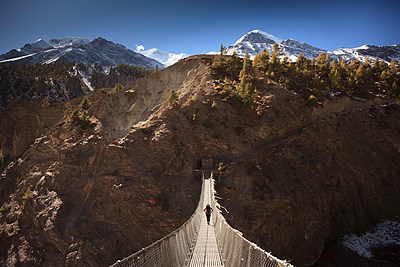 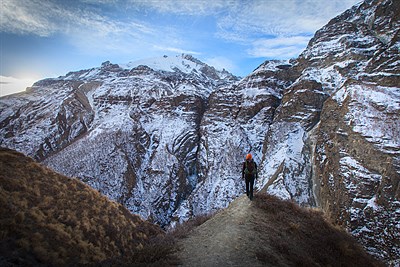 The three days walk to Tilicho Lake and back is certainly the highlight of the whole trek. The trail rises to four thousand meters, magnificent views open to the south to the massive mountain range and back to Manang valley. We pass the large landslide area with beautiful rock formations. The ascent to the lake is hellish, and we go up eight hundred meters to the so far highest achieved altitude. Almost all expedition members have severe symptoms of high altitude sickness due to lack of oxygen. They do not pay any attention to the beautiful lake and keep asking about the possibility to buy an ice cream. 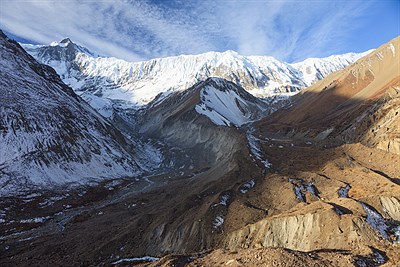 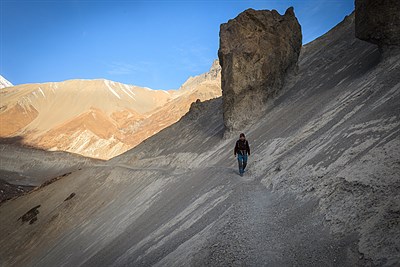 In the Valley of Old Kings

We manage to find a shortcut back from the lake to the main trekking route, which is albeit longer, but much more icy on the other hand. The valley gets narrower again, and we start to guess where is the feared pass where forty-two people died last year during the unexpected snow storm. 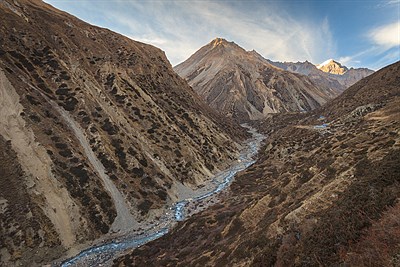 The number of tourists grows before the Thorong La pass. We are almost the only ones who do not use Diamox pills to lower the symptoms of high altitude sickness. Two kids from Netherlands walk only in jeans, and they are of course bitterly cold thus, they take some amphetamine to warm up a bit. Other people have an insightful discussion about the combination of those medicaments and how to prevent some significant side effects. The world goes insane, we feel as on the high altitude junkie party. The night before the pass is difficult while crossing the pass is rather easy for us. My admiration in the saddle does not belong to selfie-addicted trekkers, but to a couple of men serving hot drinks in the local stone teahouse. They spend full six months of a year in very hard conditions. It is noticeable that the limit for biological survival is about three hundred meters lower. 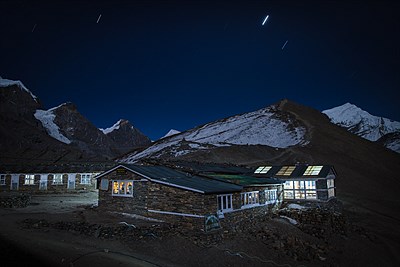 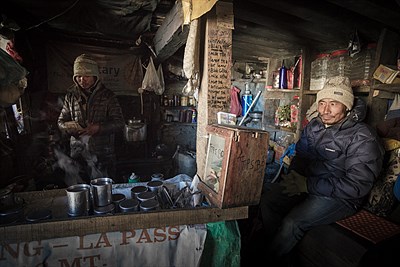 Although we know in advance, that the landscape after the pass is different, we are quite surprised by the change anyway. We observe deserted country and differences in architecture, clothes, and typology of local people. Almost exhausted, we descend 1700 altitude meters. Such an important day deserves a celebration with shower, my first on the trek. I have a very good luck when photographing the following evening and morning as well - incredibly dominant Dhaulagiri is decorated by amazing sunset and sunrise. 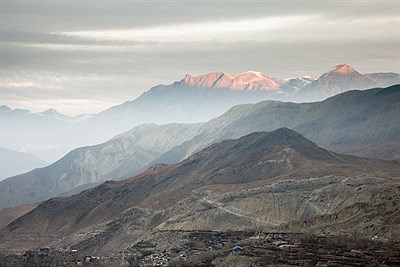 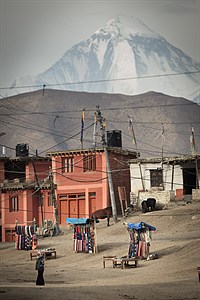 We descend another thousand meters to the valley of Kali Gandaki river which breaks between the two neighbouring eight-thousanders and creates the so-called deepest canyon in the world. The walk to the south is quite uncomfortable as the cold winds blow every afternoon and throw sand in our eyes. We have a lack of time, so we decide to use a bus for one day. Public transport has certain specific attributes in Asia. Therefore, I will describe in detail our journey (the evening before, the ticket reseller tells us that the bus starts at 7:00 and that we should be on the spot at 6:45):

My place is the most prestigious one, in the left back corner of the bus. Most of the trip I have a fantastic view of the two hundred meters deep, steep and very loose canyon. In the right-hand turns the back side of the bus is so much out of the road that the perpendicular line triggered from my ass intersects the river below. The bus shakes and leans in an incredible way, so it takes me five minutes to read the name of the village from the map I hold in my hand. We cover thirty kilometres distance in not even four hours drive when the bus suddenly stops, and the driver tells us that he's on strike and cannot continue. We have to walk again, but to be honest, most of us appreciate the sudden end of the bus adventure a lot. 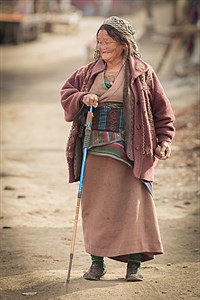 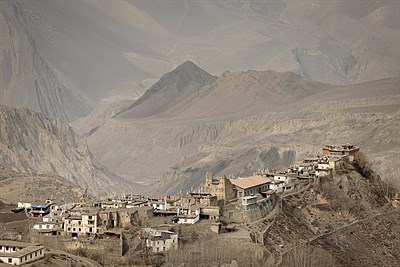 We descend for the rest of the day along the river until we reach Tatopani where starts the last part of our trip: we want to cross the viewing point Poon Hill, one of the most visited in the country also by local people. The ascent day is not very tough but is quite long anyway. This day is perhaps the most pleasant day of the trek as is agreed by the majority of expedition members. The villages are beautifully placed on the northern green slopes opposite to majestic Dhaulagiri and Annapurna range. There are plenty of mandarins growing around us. We see hundreds of happy yaks and water buffaloes eating fresh grass. 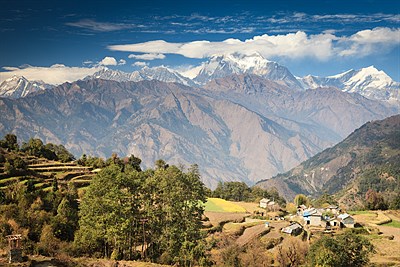 We hardly manage to arrive at the popular and frequent viewpoint Poon Hill. The panorama seen from here is fantastic and it is here for the first time we can see the Annapurna mountain itself, however still a tiny bit of it. It clearly shows up, that the name of trek 'Annapurna Circuit' is nothing but a marketing bait created by the Nepalese government to attract unsuspecting people same as we are. 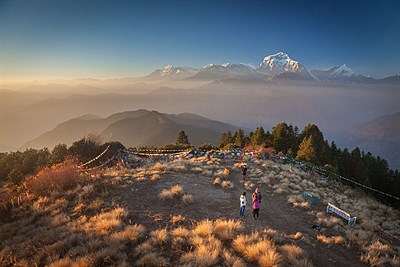 After a very long descent, we have a chance to spend the only rest day of our holidays in Pokhara, the mecca of foreigners visiting Nepal. Our day there is not much restful, however, because most of the members of our expedition go insane and try to buy millions of colourful scarves, perhaps as a reserve for next thirty years in the case of the global nuclear war. The ride to Kathmandu takes horrible ten hours. The whole country suffers more and more from the crisis caused by Indian blockade, yet we can, at least, breath normally in the capital city because the traffic is limited. Our plane from Kathmandu lands on after a few minutes in the nearest Indian town to refuel, and only then we can continue to Dubai.

If I may compare this trip to the one to Everest, we did two years ago, I can sum up the following: Everest trek is more demanding, much, much colder, more spiritual and the sceneries are more epic, while Annapurna is more diverse, pleasant and - I don't know how to say better - cute. There is absolutely no doubt it is worth doing both.