Sometimes one has just enough of the European life in order, cleanness, and freedom of movement and starts to dream about the opposite. And the best place to fulfil his wishes is the cradle of chaos and dirt - Asia. Well, if Asia then certainly mountains. And if mountains then certainly Nepal. And if Nepal then no doubt to Everest. This time, we spend some time on preparation of the trek and bought high-quality ultra-light equipment. Apart from usual vaccination, I got a bite from a tick, so I leave home with suspected Lyme disease and a batch of antibiotics for two months.

The first problem we encounter right on the Prague airport. The girl behind the desk announces that we cannot go to Nepal through New Delhi because we don't have the Indian visa and suggests to get rid of the trip and go back home. In the following stress, we initiate big action over the phone which ends up near Indian prime minister, and the transfer is finally ok. During the last flyover to Kathmandu, we follow the Himalaya ridge and the plane goes heavily tilted as all passengers, including us, stick up to the windows on the left side to enjoy the view to the highest peaks in the world. The capital of Nepal is one of the three most polluted places on Earth, apparently because of massive corruption which allows diluting the fuel with yak urine. And indeed: we spend there no more than 24 hours just to buy equipment and tickets to Lukla, but our sputum becomes almost black. 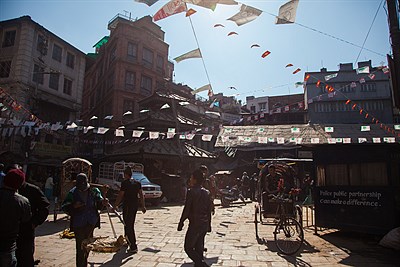 Most people start the trek to Everest by flying to Lukla, statistically the most dangerous airport in the world. Landing there is something you do not recommend to anyone, perhaps except Adolf Hitler and the guy who invented hip-hop. The first day of our trip we descend to the valley and follow the river Dudh Kosi. From time to time we see a tiny bit of snowy peak, and as naive newcomers, we discuss whether we see that Everest or not. We experience first tough hike the next day when we go up to famous Namche Bazaar, the last civilized place on the way to the upper Khumbu valley. From there it is highly recommended to ascend no more than 400 altitude metres per day to prevent the high altitude diseases. Even though we observe few symptoms of this dangerous illness, such as dysorexia and bizarre dreams at night. The second night I have for example a dream that I became a fan of George Bush on a social network. After a few days, it's thankfully gone. 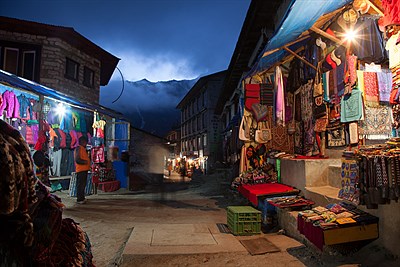 From Namche, we head through the Gokyo Valley to the north in the direction of Cho Oyu - supposedly the easiest of eight-thousanders. Every day we climb so we have to continue slowly. The day hike is usually finished at noon, and the rest of the day we stare lethargically on the walls in our lodge. As the days pass, the trekkers diminish quickly. According to Lonely Planet, the season is over in mid-November while the weather, in fact, remains excellent. After a few days in Gokyo, we know all the brothers on the route. We enjoy the most the group of Ukrainians who share with us their supplies of delicious fresh vegetable. 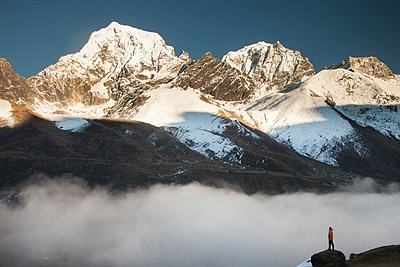 In the Gokyo Valley

The fourth day we reach the Gokyo settlement at the end of the valley with altitude 4800 metres. The place is beautifully bordered with a cascade of glacial lakes, but the highlight here is undoubtely the ascent of Gokyo Ri aka Peak. The reward of the painful trip is a magnificent view of Everest, one of the finest in the whole Khumbu area. We climb without bags, and still, the hike is torture. When going up, I'm not able to put my foot before the other one, and Andrea suffers even more. On the top, she turns back immediately because of a headache. I remain almost sole there while waiting for the evening shooting. The only person who stays is mysterious photographers covered with yak quilt who constantly speaks about the eternity of the Universe. The sunset is gorgeous. The air is so clear that you can almost touch the mountains around and the colours are quite unusual. The guy suddenly decides to descend about 30 minutes after the sunrise. He walks incredibly fast, and I try to follow him which almost kills me, just trying not to stay the last one on the hill. 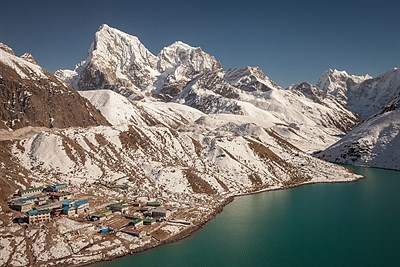 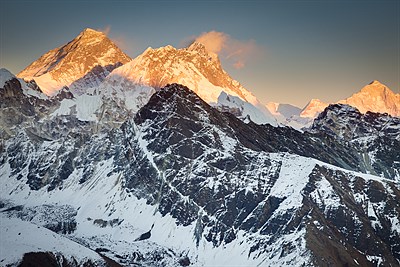 Our next goal is ambitious: cross the Cho La Pass and come right to the upper Khumbu valley to Everest base camp. The pass is said to be icy and slippery, so we decide to go together with two Japanese guys. In a case of emergency when you have to immolate someone's life, there are much more Japanese than Czech and Slovak people in the world. We cross the Gokyo glacier to get to the other side of the valley and sleep in an almost abandoned lodge. The next morning I have difficulties to get up, mainly because the lack of sleep, which lasts for several days and I manage to (easily) convince the group not to cross the pass. Instead, we have to go around the range by much longer route but in lower altitude. The hike is demanding, the path goes up and down all the way, but thanks to acclimatisation we manage to complete the same distance which took us four days in the opposite direction. The views of Khumbu valley are of course breathtaking. 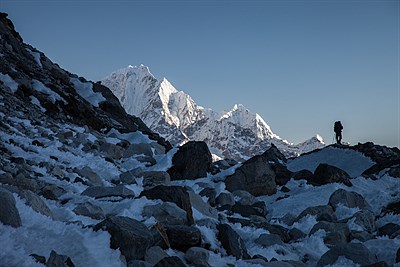 We ascend again through the villages of Tengboche and Pangboche via the main valley towards Everest. We realize that we have a couple of days head start, so we turn our feet to side valley Chhukung with another peak to hike. We move alone for days, and the route is almost empty. We circle Ama Dablam, one of the most memorable mountain shapes in the world. In Chhukung lodge, there are about ten trekkers, all of them except us are solo and quite dull. The only guy willing to lead the conversation comes from the Netherlands and treks for six weeks already. 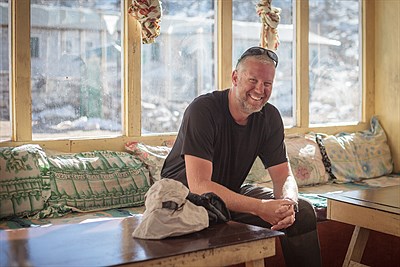 We climb another tourist peak, Chhukung Ri. This one is 200 metres higher than previous Gokyo Peak. There is no solid path to the peak, so we have to jump over the stones which is both dangerous and very tough with the lack of oxygen. On the top, we stand next to the southern wall of Lhotse, considered one of the most challenging ascents in the world. We also break another personal altitude record here, 5550 metres above sea level. The sunset is gorgeous again. I have to roll around on the dusty ground to make compositions because I have only a tiny gorilla tripod to prevent heavy bag. We descend in an entirely dark night and the temperature drops below minus twenty. It's not cold anyway, perhaps thanks to the extremely low air humidity. 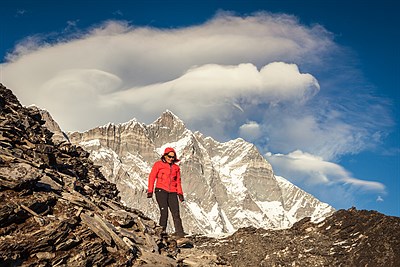 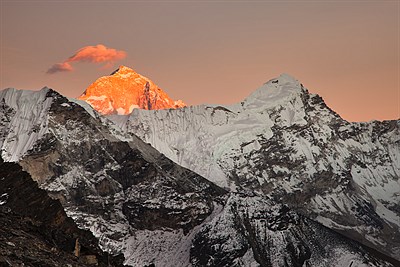 Back on the main route to Everest base camp, we meet more people again. In Lobuche, in the upper part of the Khumbu valley, we witness the coldest night so far. Our bottles of water freeze completely during the night. There is no heating in lodges in Himalaya, but the weather here is probably caused by the glaciers around. After two days of tramping through the moraine of Khumbu glacier, we reach Gorak Shep. With altitude 5150 metres, it is the highest place to sleep in the whole area. Right after the arrival we continue to Kalla Patthar peak. The peak offers a fantastic view to the highest mountain in the world and is the final goal of our trip. The ascent is relatively easy, and we take advantage of almost two-week acclimatation. Few hundred metres below the top we overtake an English guy, age 89. On the top, you can feel that you can almost touch Everest. The top of it remains the last enlightened thing around during the beautiful sunset. We descend in a complete dark again, and it's colder than ever before. The winter season is approaching. 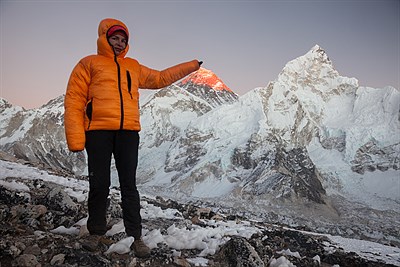 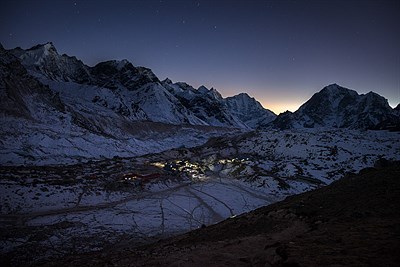 All we have to do now is to descend through the Khumbu valley back to Lukla airport. It took two days to Anatoli Boukreev, and we need only one extra day. We are quite proud of our performance until goddam oldster from Kalla Patthar overtakes us. The season is over, we sleep for free in lodges and pay only for food. The highlight is the visit to Tengboche monastery. The local developers had a good sense of location selection in the past. The monastery has the most magnificent view you can imagine. We spend quite a long time in conversation with the monks. Apart from other things they explain to us that Khumbu valley is declared as a holy place of Tibetan Buddhism and killing all living creatures is completely forbidden here. You can clearly see it on animals around, and they have no jerks when passing around people. All the meat consumed here is transported on the back of porters from the lowlands. We can also state that the whole area is free of any aggression, verbal or physical. We meet almost no trekkers on the way, but the number of local porters stays the same. They do not serve to old Japanese ladies, but they transport the construction material now. 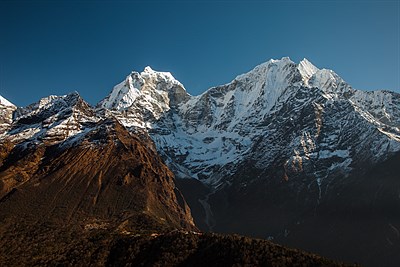 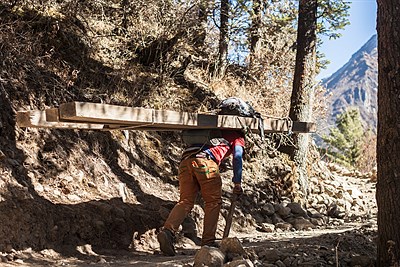 The whole descent is ironically more demanding because we are better acclimatized and can deal with longer day hikes. We also hurry a bit to catch the plane to Kathmandu. It is recommended to keep a time reserve before the flight because when the plane crashes, it takes quite a long time to build a new one. The situation at the airport is a bit messy, but only the spoiled western tourist protest. Everybody else is ok with that, and the locals know that everybody will get to the plane sooner or later. We take off on the shortest runway in the world, and those who are not fast enough during the start will probably not enjoy their beer in the city. 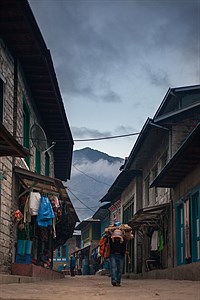 We enjoy the last three days in Kathmandu. The timetable is the same every day. We start with delicious breakfast on the hotel roof for less than one euro (we try to get back ten kilos we lost). The breakfast is followed by a couple of hours of shopping madness of trekking equipment we want to take home and some rare visits to local sights. The capital of Nepal is undoubtely the most vibrant and colourful place I have seen. Once, during the evening rush hour, we get even stuck in the traffic jam caused exclusively by pedestrians. People just stand calmly on the road, move slowly forward and wait until the traffic jam is over. 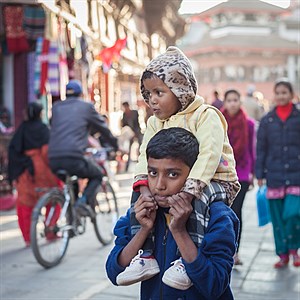 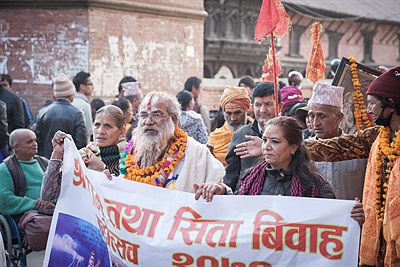 Going back home is painful. Walking in absolute silence around eight-thousanders and sneaking on chaos in the capital city is something that you hardly experience in my hometown. Well, we have to deal with that somehow in our lives, and we already look forward to visiting this incredible country again in the future.