This year, the union funds finally opened their pockets, and there was an option to organize a professional expedition to the highest mountains in the world. Our group can afford to hire a local professional guide and being accompanied by one of the best trekkers in the western Europe.

The full logistics preparation is ready before my arrival to Nepal, and after only two hours after leaving the plane, I sit on the local bus to Gorkha together with our guide and my friend Guillaume from France. In Gorkha, there is the end of the asphalt road and the end of fun as well. The next phase of the route is hard, if not impossible, to describe. I accidentally sit in the last row, we are eight people there instead of five. The constructor of the vehicle forgot to project the place for legs. People are so jammed in the gangway, that they resemble the Tetris blocks rather than human beings. I think the whole time how to vomit. If I try to put my head through the window, I risk breaking my neck. Finally, I decide to vomit on the vehicle floor as usual (in the case of emergency). I also feel horrible pain almost everywhere as my body repeatedly hits the sharp edges all around me. After five hours of this hell, and thirty kilometers on the road, which would be forbidden even for tractors in Europe, we reach Arughat Bazaar. Altogether we have spent eleven hours in the bus to appear about fifty kilometers as the crow flies from the capital city. From this point, we walk. 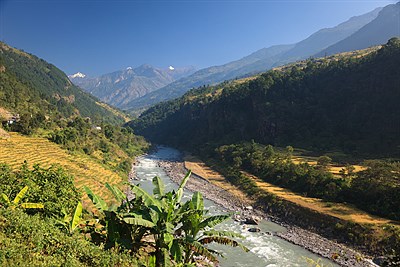 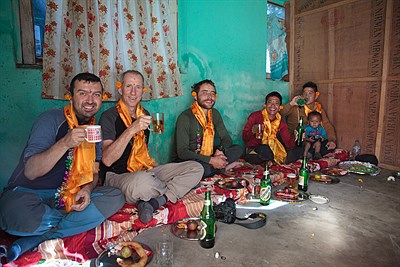 We start our trek in full speed. The first part is in the lowland, and the temperature is quite high during the day. The trail is in a horrible state and goes all the time up and down. It's all very frustrating. After eight hours of quick walk, we are only two hundred altitude meters higher than in the morning. The local people celebrate the Tihar festival all around us. During the first evening, they burn candles and lampions everywhere. Next day, the children go through the villages, sing songs and ask for a few money. The adults then celebrate to the late night with lots of alcohol. At two o'clock in the morning, we witness a real Nepali hand fight just in front of our window. Next morning, the housewife cleans the large bloodstains from the floor. 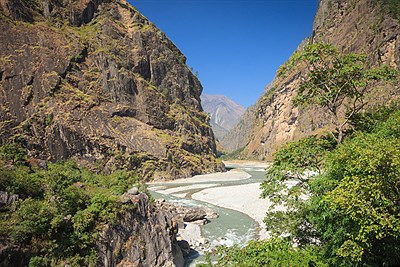 The first part of the Manaslu circuit follows the canyon of Budhi Gandaki river. The surrounding landscape is more dramatic every day, mountains around us rise to five thousand meters while we are still under two thousand. More than any time before, I feel depressed, constrained and abandoned in the vast deserted land. There are very few villages, and if so, they're small and half abandoned. The steep slopes of the gorge do not provide much ground for men. I became the weakest part of the expedition, and I start to discard disposable parts of my backpack. I leave my pullover, toilet paper, shorts and muesli bars. I feel much more comfortable, and the locals are happy. 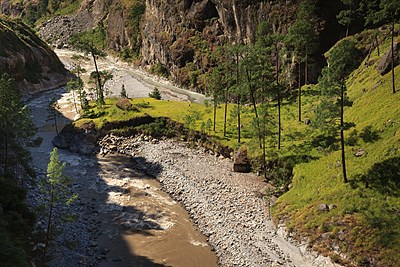 After four days of walking, we abandon the canyon and enter a wider part of the mountain valley. The trail is surrounded by beautiful deep forests and villages with small terraced fields with rice and corn. It is the harvest time, and we see people working in the same way as in our country two hundred years ago. 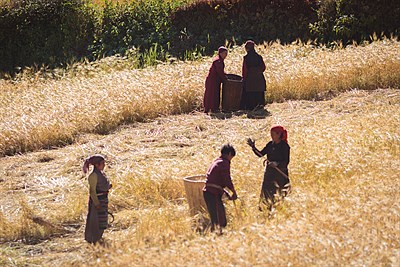 We enter the village of Lho. It is arguably the most wonderful place on the circuit. A Buddhist monastery looks down to the large settlement made of stone which is placed among the larch forests. We also observe the mighty peak of Manaslu for the first time. We want to spend a night here, but our guide insists of going further up to Samagon. 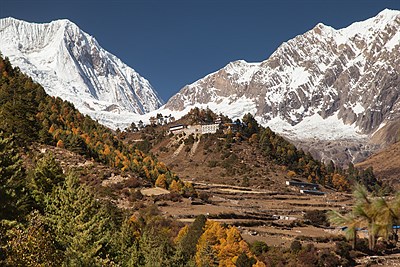 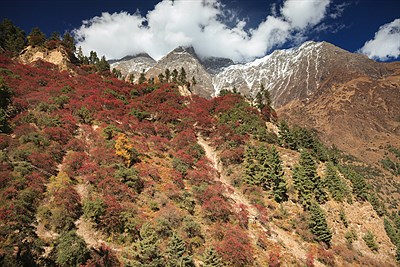 In Samagon, we have an acclimatization day. There is no GSM or the internet on the whole trek, but to be sure that I have a real digital detox I manage to lose my phone during the day somehow. We go for a short trip to the near lake right under the Manaslu glacier. There is a herd of yaks standing without any movement in the lake. After twenty minutes when the animals cool down a bit, the start to move slowly again. I never saw something slower than yak, probably. In the morning we try to take a picture of the Manaslu peak hit by the first light. We meet the group of twenty Japanese doing the same. They came with helicopter last evening, and in two days they fly even higher. It's a very effective way - you can see the whole country in less than a week like this. 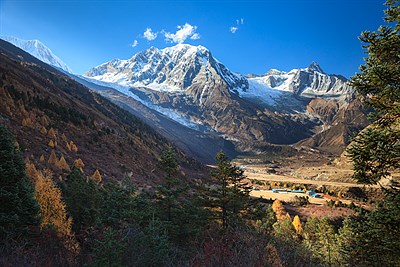 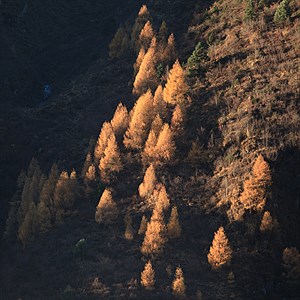 The high altitude part of the trek starts after Samagon. We reach Samdo with height almost four thousand. I walk alone for an acclimatization trip to the steep slope behind the village. An incredible view of the whole Manaslu range opens on the south, and I can also see the pass which we are going to reach in a few days. I witness the silence for the first time on the trip, so far we were always surrounded by civilization or raging river. When the slope enters into the shadow, the temperature drops by maybe thirty degrees, we are really high here. Almost frozen I descend quickly back to the lodge.

We approach the pass, and there is no permanent settlement anymore. I ascend slowly and out of my mind, due to a lack of oxygen, while I hear a terrible sound. The avalanche is falling down on the northern wall of Manaslu. Before I can react, the avalanche is almost over. 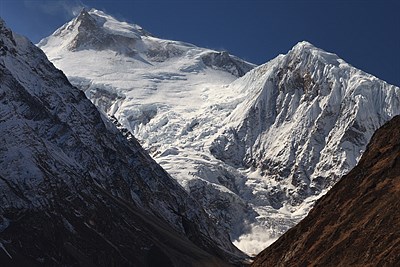 The Larkye Pass is lower than Thorong La on Annapurna circuit but is arguably slightly harder to cross. It's longer, the trail is rougher and the top part is again a little bit of familiar up and down across the glacier moraine. We wake up at three o'clock to avoid the wind which starts to blow every day at ten. I'm quite confused so early, and I watch our guide putting boiling water into my filtration bottle which makes it immediately broken. After four hours of climbing, during which we witness a beautiful sunrise, a sign appears unexpectedly, which says we reached the highest point on the trek. We take a few shots and head for a descent. I feel like a hero until we meet a group of porters walking in the opposite direction. With rubber shoes, jeans and tiny vests they walk slowly up, some of them carrying fifty kilos of the load. The opposite side of the pass is much steeper and the altitude difference is almost two thousand meters. Most of them can hardly reach the camp before sunset. 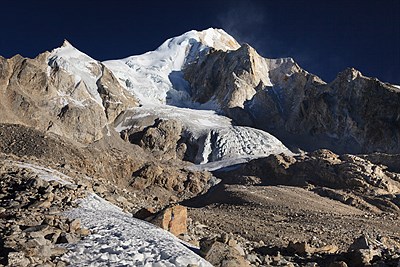 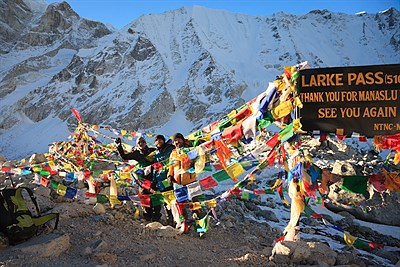 We share a bottle of beer when we reach Bimtang and I fall asleep almost immediately right on the table. Bimtang is one of the most beautiful places I visited. The valley is surrounded by vertical icy peaks and is covered by a beautiful forest. I try evening and morning shooting, but the sky is too clear as usual. 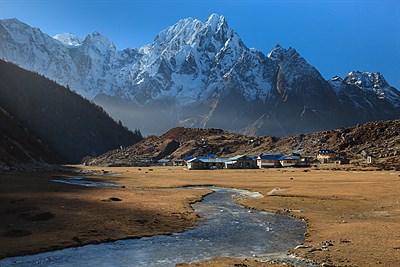 After two days of descent, we are ready to dissolve our company. My friend is starting the Annapurna circuit, our guide is waiting for the jeep ride to the lowland, and I choose walking down on my own. I feel said, I have no phone to communicate, I walk alone and I return to a (politically) different world than I left two weeks ago. I walk for about two hours, and suddenly two sherpas run to me and ask me to stay and wait, the only word I understand is 'phone'. I a few minutes a jeep with our guide arrives and I see my phone in his hands. From what I understood, the information about stolen phone spread across the valley and our guide accidentally met the group with the thief just a few minutes before his jeep came. Then he forced him to give him the phone. A few selfies of the culprit remains in my device as a sweet memory to this little story. 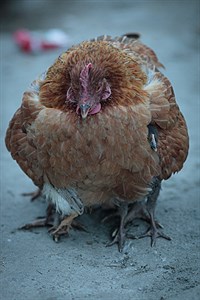 Last two days of the trek are filled by meeting the interesting people. One elder man from Australia made the whole circuit in almost three weeks while having a unique machine breaking the pain operated into his body. His backbone was severely hit many years ago, and since that moment he has strong phantom pain and cannot master his bladder. I spend the last night in a dusty lodge right under the constructed dam on the river. The housewife begs me on her knees to stay for a night. She says she did not have a single customer for a week. The progress of civilization has its winners and losers here too. 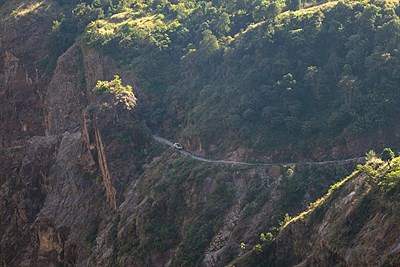 The circuit ends with the beginning of paved road in Besisahar. I want to go to Pokhara by bus. Because public transportation in the poorest Asian country yields some specific aspects, I decided to describe my journey in bigger detail. 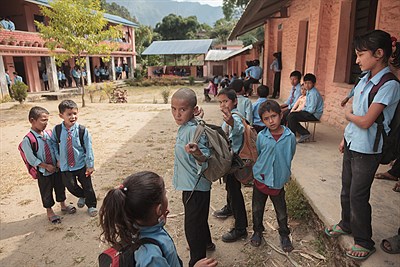 Pokhara is a much nicer place to stay this year. Last time we visited it, the city was covered by a cloud of smog caused by the Indian embargo. The eight thousandeers surround the view of almost every street in a surreal way. After having a short rest I climb to the Sarangkot village and viewpoint above the city. It offers one of the best views of Himalaya range. It is also a favorite spot for locals, you can see many weddings and other ceremonies there. 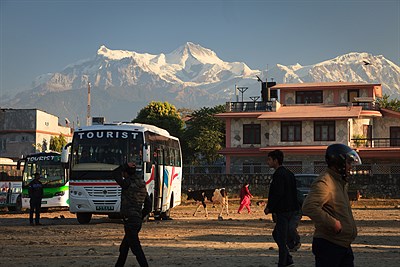 The transportation to the capital city, which is two hundred kilometers away takes ten hours as usual. It's quite frustrating to see the stagnation of the country. While we almost finished the discussion about the refugee's quotes and we agreed that we have to discuss the construction of high-speed railways in our country in just last three years, here they just built a few poor dams on their rivers and covered few hundred kilometers of roads with asphalt. You have to speed up a bit, dear Nepalese people, to overtake Europe! 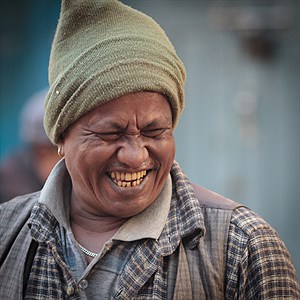 Last two days in the capital city, I spend by taking pictures of this most lively and colorful place on our planet. I especially like the vegetable market north of the historic center. It's a photographer's nirvana. On a tiny area, you can meet men and women of tens of ethnic sources and few religions. Everything here works by the fixed but invisible rules. 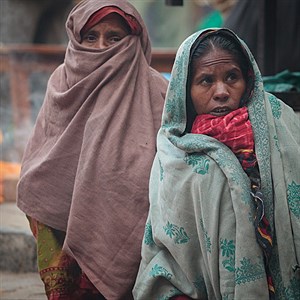 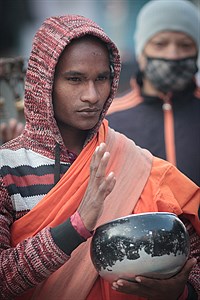 It's necessary to say that walking through the city and taking pictures is an expensive hobby. Tens of people try and succeed to get at least a bit of money from you. In one day I saw a Sadhu who swallowed a burning cigarette, begging monks without a slight movement in their eyes or wild monkey traveling by an endless electricity net through the streets. 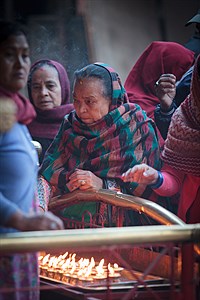 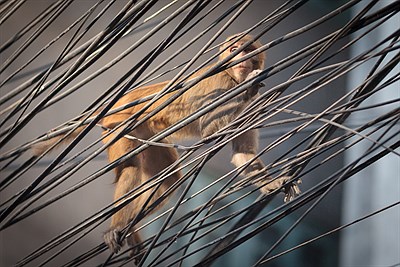 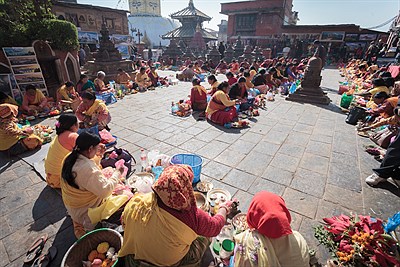 I'm truly grateful that I could finish the Manaslu circuit. Thanks to the obligation of having a local guide it's less crowded than other popular treks in Nepal. The road is being constructed as well, which will eventually lead to the pass and then to China. This will certainly stop trekking activities in the area. Manaslu is demanding, but some of the sceneries we saw are among the best ones in Nepal.