September 2001: threadbare, dirty and hungry young hitchhiker is standing on the road near the Norwegian city of Narvik and is watching sadly the sign marking the byroad to famous Lofoten Islands. Then he turns his head back and sets for the way home. He knows that he is short of time and has to go back to school to pass the exams and not to disappoint his native village, whose residents saved money for years for him to allow him to study in the capital city.

After long fifteen years, I can finally fulfill my commitment from childhood, visit one of the most impressive landscapes in the world. The journey to the north of Norway completes our European arctic photography trilogy. While an expedition few hundred kilometers north of polar circle is logistically very demanding, our group has more members than usual. We have a driver, a navigator, a cook, a photographer, an animator, a supply manager and technician - I'm responsible for all those roles. Then we take a supplementary cook, a perfect role for my partner. The flight from Oslo to Bodø promises in advance that this part of Norway will be an exceptional aesthetic experience. 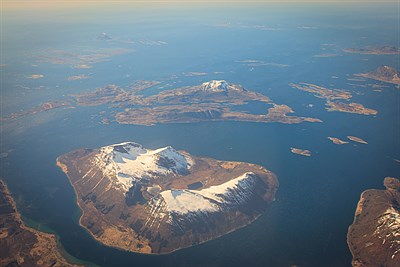 Renting a car is a painful experience taking us several hours, as always. A few kilometers after the city we visit one of the strongest tidal currents in the world, which causes many visible maelstroms. It's either broken at the moment or we don't know where to look so we turn back and head north by the only road in this part of the country. Because we are tired after the night ride to Berlin, we stop soon for overnight camping along the way. By chance, we go around one of the symbols of Norway - a fantastic peak called Stetind. The famous Matterhorn should be called Swiss Stetind. We try to penetrate the top, but we are stopped at the altitude 300 m by slushy snow fields. 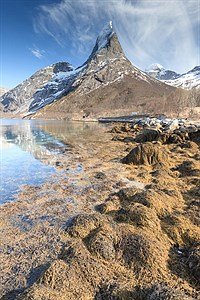 On the way to the north to Senja island, we step out to Sweden to see at least a bit the Abisko national park. As we cross the mountains on the border, the landscape completely changes. We approach an arctic=like snow desert with rocky hills and no trees. Abisko is a starting point to many long distance routes, we, however, manage to walk few kilometers as our shoes get thoroughly wet from melting snow. We observe local women coming back from the ski walk tour over the half defrost huge lake. To our big surprise, they take out their little babies from the chariots they were pulling behind. We leave the harsh Sweden wet and depressed, at least I have a chance to photograph the nature icon of the country - The Lapland Gate.

Walking on the lake

Senja island is an abandoned place between Lofoten and Nordcap. It is not even noticed in any guide book, and indeed we meet no one in almost two days spent there. Unfortunately, we also miss the place I choose at home to photograph - an incredible rock near Segla, and there is even no one to ask for the direction. We compensate the frustration by a beautiful hike over the Gryllefjord. When I mentioned that in Iceland it takes longer before the sun sets down, here, it takes ages. You observe the sun being low and you sprint to the hill to catch the sunset. When you reach the top, you mention that the light did not change at all. You sit down and wait... You drink coffee, second one, you cut down your nails, write a short message to each family member, you eat something, you count the hair on your left hand, you finish the book and you fall asleep from exhaustion. When you wake up in three hours, you realize, that the sun is rising again and you have to wait at least twenty hours to catch the next sunset. 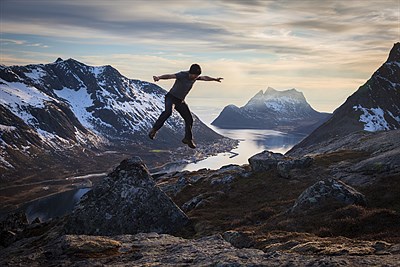 We turn back south and follow the road to the west to Lofoten archipelago. The way itself is a lifetime experience. Supplementary cook mentions that she had spent last four days without a shower which is more than enough. We finally manage to find a cheap accommodation at the seacoast near Svolvær where we take a nap and set for the evening shooting. I plan to follow a trail marked on the map nearby, but when we arrive at the beginning of the trail, we see only steep rock with falling water streams. Eventually, there is a trail, but it leads most of the time through the small river sometimes even falling over our heads. Supplementary cook has difficulties to follow the path, no matter she does not carry heavy photographic equipment as I do. I shoot the beautiful view to Svolvær and after arrival to our settlement around midnight, I do not go to sleep and stay outside the whole night. The sun sets only a little bit under the horizon, and the beautiful light allows to take pictures for the entire time. I go to sleep around four in the morning. 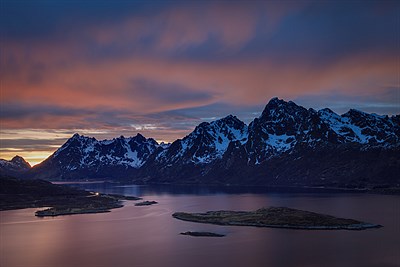 We continue west and hop from one island to another. The landscape gets wilder and rougher and the villages get more deserted. We pass around huge, incredibly nifty constructions made of wood, full of dried fish. Some of them contain only the heads, other only the bodies. To forget this monstrous experience we collect some money and go to eat local pizza in the nearest town. There we can directly testify a bad role the immigrants play in Europe. The waiter, originally from Turkey, has such a bad English pronunciation that I understand a wrong amount and overpay more than ten euros. He worships heavily and says thank you many many times. I discover my error when I read the ticket on the street while our money is already on the way to a jihadist cell somewhere on the border of Syria. 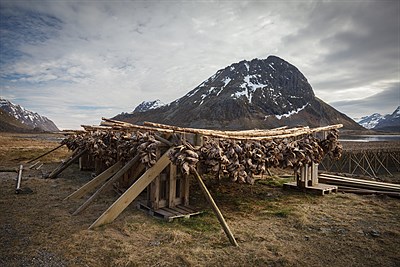 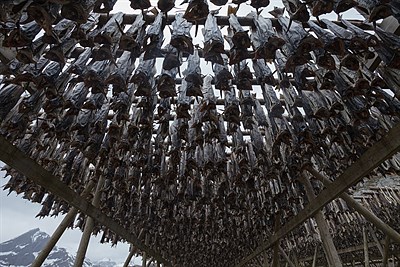 To get over such a horrible experience, we lay on the beach fo the whole day. In the evening, I try my luck again on the local peak called Offersøykammen. As we climb, the view gets better, but we reach the top together with moist air, condensing into a heavy fog. As we descent the fog descends with us, so we see nothing until we get to the car. The next day we hike to a peak called Mannen between two beautiful beaches. It's perfectly cloudy, and the sun is low enough even at noon, so I manage to make a satisfactory panorama. Later at night, I enjoy long exposure shooting on Utakleiv beach covered by big round stones. After a few nights spent outside, my cognitive functions drop down to the level of Donald Trump electorate. 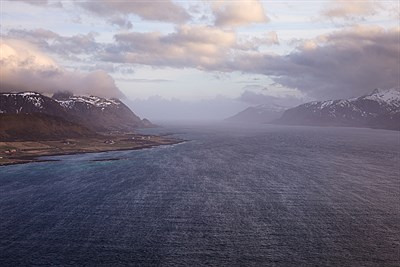 Visualization of the wind

The highlight of my photography experience should be the view Reinebringen, at the end of Lofoten Islands over the Reine village. As for anything in Norway, you have to pay for it. This time, we pay by fear during very steep and dangerous wet trail to the top. After two hours of slipping on wet rocks, we reach a very steep and frozen snowfield just a few meters below the ridge. Supplementary cook proposes to risk the life because the destiny of our expedition is not dependent on her. I have much more roles in the group, and so I responsibly choose to go down without seeing any view. The descent is even worse than the ascent. Later at night, the weather goes bad and all around us is just depressive. No matter what, I try my luck also our last day on the islands. We climb a steep peak over the Henningsvær village, beautifully posed on small rocky islands below. Our ascent is successful, and we reach the altitude 541 meters, the weather gets calmer, and we witness the most spectacular view of our trip. From the top of the hill, we observe most of the archipelago as well as a large part of Norway mainland. 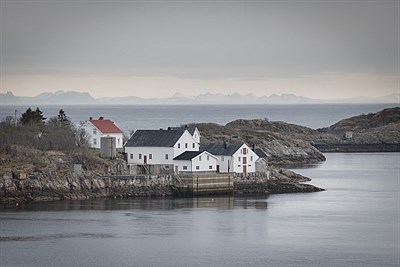 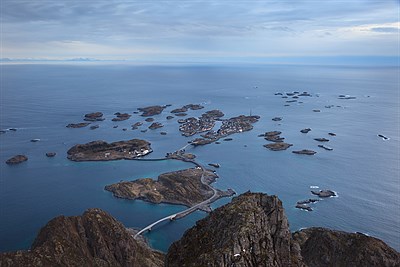 Norway says goodbye in the very romantic absolutely disgusting wet weather conditions. We spend last night in the guesthouse in Bodø, which is lead by guys from our country. Therefore, we have a chance to get to know a lot of useful stuff. They tell that the city is uninteresting sleepy hollow, burned down at the end of the second world war. They also advise buying a can of tuna fish, probably the only thing which is cheaper in Norway than at home. 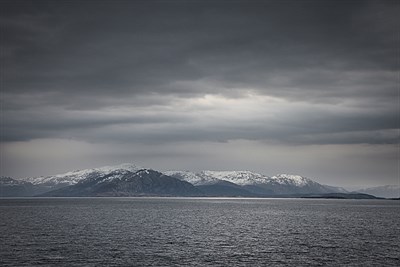 Lofoten Islands are probably one of the most spectacular places in the world, and I'm sure I will come back. I would especially like to photograph the local beauty together with aurora borealis, best visible in late winter.