I had the intention to shoot in Scotland for about the last two years. Together with my friend Pepa Havlin we were probably the last living photographers who did not try their luck there. Initially, we wanted to go in the early February, but finally, we postponed the expedition to half March. And it was a right decision.

The direct flight from Prague to Edinburgh is one of the advantages of the 21st century. However, you cannot say the same about the catering provided by EasyJet company which rather reminds the Soviet Gulag of the last century. I encounter the first inconvenience right after arrival: my bag is almost completely destroyed by a couple of pipe-hitting niggas working at the airport. I almost do not recognize it. In the local car hire company, we obtain brand new car together with a warning that in a case of any scratches we should not even try to return it. The office girl's reaction to every our sentence is the word "Fantastic!" with such a wry face that I almost hit her with my tripod.

We set out on Isle of Skye which is on the western i.e. opposite side of Scotland. For some reason, they drive on the left side there, so the first few hours are a bit nervous. However, we manage to get over it easily after a few shots of old Scotch. We encircle some of the roundabouts two or three times to remember the way back home better. Later in the afternoon, we reach the Highlands. We are both in shock: I am surprised by the beauty of the country, Pepa as a driver by the poor quality of roads. The first evening we shoot in the famous Rannoch Moor area, and after the sunset, we move on to the first iconic place in Scotland in the beginning of Glen Etive where I manage to create my first photograph. 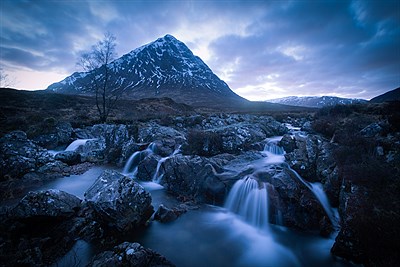 The night is surprisingly cold in spite of the fact that the temperature is hardly below zero. This is probably caused by high humidity of the air. Also, the ground is completely swamped. Luckily we finally find a bit of land suitable for our tent. The next day we pass the famous Glen Coe which deserves five minutes of our attention. Before entering the Isle of Skye, we stop our car in front of the Eilean Donan castle. The thousands of tourists around look like trying to simulate the middle age attack of the English army to the castle.

The first location chosen on Skye is Elgol. It is a small village on the bank of the gulf with the most jagged mountain range in the world or at least in Britain. We try long exposure shots during which we have enough time to lead a conversation with a strange photographer from Latvia. He warns us of the water in the ocean, and he says that it is completely wet and we have to pay attention. He also says that there is so much rain on Skye that it makes no sense to try to photograph anything here. The evening sky is however almost clear which is of course not perfect. Next morning we try the same location in hope to have better luck, but the weather remains the same. Even the guy stays in the same place. The only difference is that my camera stops working in random moments. It announces that the lens signal is wrong and that it wants to give up and go home to have a rest. Fortunately, my friend is a technical genius, so he decides that we unmount the electrical contacts of the lens. It works, but I lose the aperture, focus, and stabilization and the lens becomes a dead piece of metal and glass. 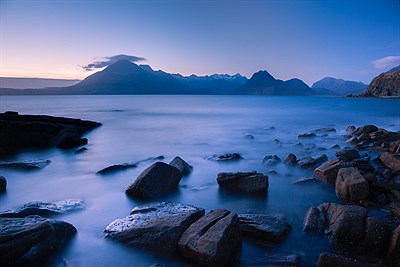 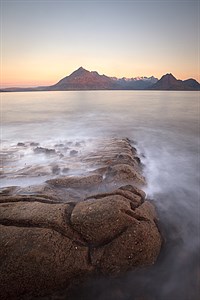 We set up to the westernmost point on Skye during the day. The way is like a fairy tale, and we pass the small roads dedicated to making ads of the most expensive cars in the world. We can see very attractive sheep all around us. Neist Point is surprisingly quite a windy place. We walk on the edges of grazings some hundred metres above the rough sea and wait for the sunset. Neist Point cliff is a beautiful place and much more breathtaking than I expected from photographs. Unfortunately, the sky is clear again. After two hours of shooting in the wind, which brings tears in our eyes, we set up for the night transfer to the north of Skye. 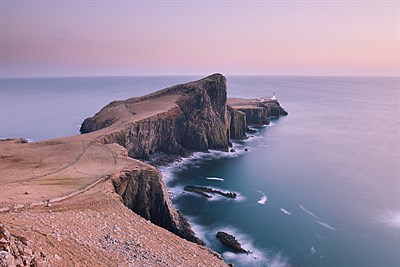 Quiraing is a place in the Trotternish mountain range in the northeast corner of Skye. Nature put so much effort to make it beautiful that there was, for example, nothing left for the place where I live. We get up very early, but we have no idea where to go, so we have to wait until the dusk. This time, it is not about the clear sky, au contraire, the sky is completely cloudy and grey. The location is so beautiful anyway that we decide to come again next morning. In the meantime, we go to see the famous Kilt Rock with the waterfall where we have to make pictures for about 60 Chinese and Japanese tourist. For some reason, they think that we are able to make them beautiful pictures with their phones just because they see us with our big cameras. The afternoon is about hanging around the northern coast and shooting on a lovely cliff near Flodigarry. 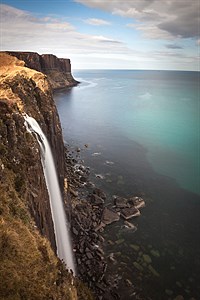 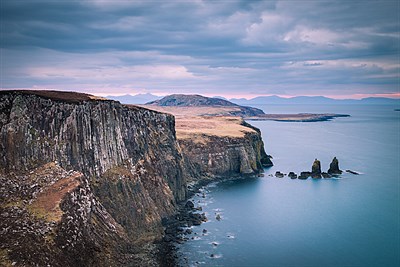 The following night we spend in the same place, and we try our luck again in Quiraing. This time, the sky is completely clear again. The word compromise is probably unknown to Scottish weather forecast service. Even though we take pictures of one of the icons in the world of landscape photography - the small tree in Quiraing - quite tiny in reality. 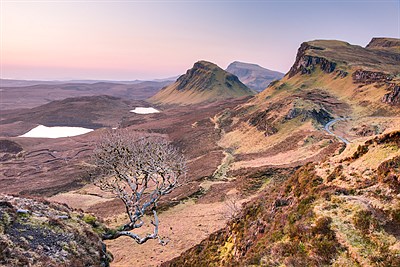 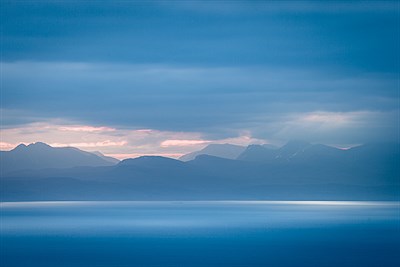 This day we decide to see how the life is going in Scotland and plan our first stop in Portree, the so-called capital of Skye. For the first time in our trip, we go to eat inside. There is no meal in the menu without something called haggis, which is - as we were told - some inner part of sheep which has to rot in the local tombs for at least three months - if I understood well. The food is surprisingly good, probably thanks to the astronomically high price and the fact that we ate only can food for five days. On the main square, we meet Danny MacAskill, the guy who jumps on his bike. He really wants to take some pictures together. We agree to, no matter we are a bit in a hurry again. 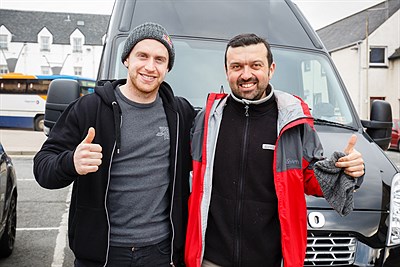 In the afternoon we go to see the Old Man of Storr, rather look around and observe the place than to shoot because the location is suitable for sunrise. At night before the dusk, we go up again. This time, we have better luck, there is a dense fog layer over the rocks. Old Man of Storr formation does not look big but compared to man it really is. 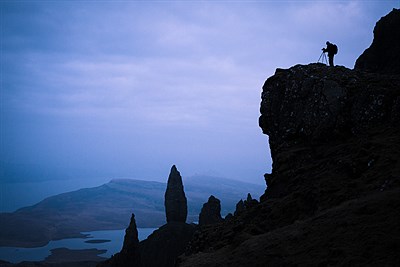 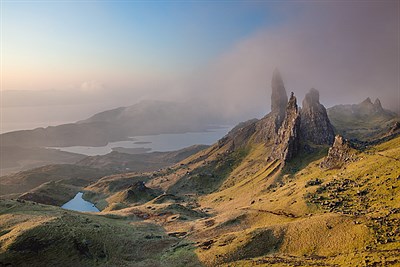 We leave the Isle of Skye two days sooner than planned. Our next plans are rather weak. We follow the road to the north along the western fjords. The land around us is wild and almost empty apart from occasional golf playground. From the landscape photographers, we become the animal hunters and trace wild deer. Although we pass many attractive places compared to those on Skye, we do not consider them convenient for shooting pictures. We decide then to change the direction and move to the south again to the area of Glen Coe where we spent the first day of our trip. So after two days of driving, we are back in the place where we spent the first night. The gloomy weather gives to the local mountains incredible atmosphere. The hills around provide an impression of vastness although they hardly exceed one thousand metres. 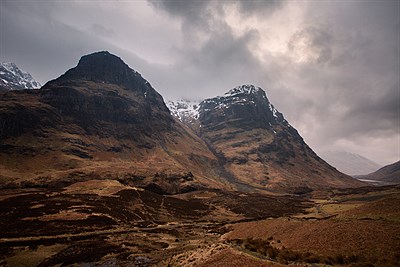 The last but one day we spend in Glen Etive. The valley is the true highlight of our journey. The valley passes the steep mountains for about 20 kilometres and continues as a fiord. We have to stop and get out of the car every five minutes. Sometimes thanks to the beauty of the landscape, sometimes because of wild deer which block the road. In the middle of the disputation with the deer, we are surprised by the beginning of the solar eclipse. 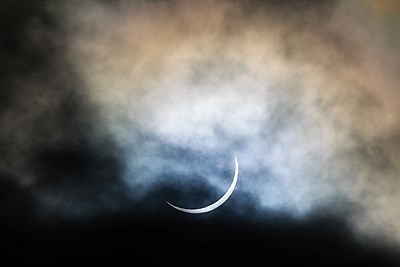 We meet the guy whose job is to get rid of the rhododendron population is the area. I have never met someone with more euphonic speech. He says that the weather was horrible here for the last three months and this is the first week when you can stay outside. We start our walk over the hills and during the short break, I accidentally drop my lens. We both observe its fall, which takes almost minutes. Later we manage to find it. The lens is almost sunk in the mud and does not look good. I have been just disproven that the Canon L lens endures everything. This one did not. This is the second lost in a few days. From bad to worse the exposure measurement stops working randomly. 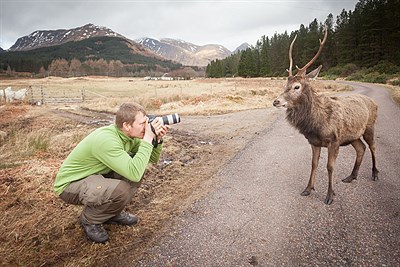 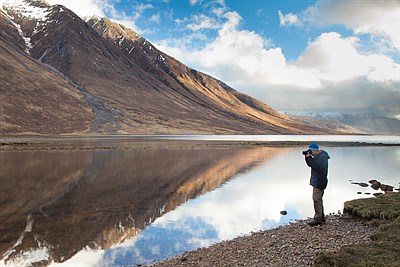 The last day we spend wandering in the capital of Scotland. We find a beautiful small pub which becomes incredibly full of people few minutes after our arrival. The match England - France in rugby is about to begin. Everyone in the pub is a big fan of France. At night, we find the last place to sleep in our car and at 5 am we go to the airport. To summarize the trip: in spite of the unsuitable weather, expensive and bad food and two destroyed lenses we enjoyed a lot, and we already look for the next time in Scotland. This time, probably in winter.