There are many reasons to visit group of tiny islands hidden in the northern Atlantic ocean. It was the attractivity of the landscape for photography for me which is kind of unique worldwide. Faroe Islands is a small country, yet relatively densely populated. The interesting thing is that being an autonomous part of Denmark, it is not a member of European Union.

We start the visit of archipelago by visiting two biggest attractions on Vágar islands, where the airport is, right after the arrival. The first one is an iconic village of Gásadalur, a tiny settlement aboe the waterfall drifting right into the ocean. The scenery looks much more romantic on photos than in reality, however I'm amazed by the scene anyway. The life in Gásadalur was probably very tough in the past as the only way out was by the sea or through the steep and demanding crossing of mountain pass still a few years ago. 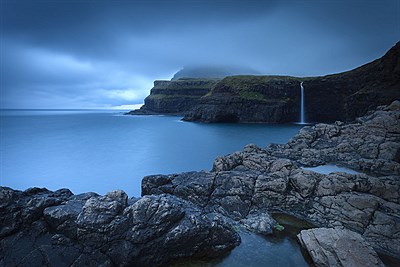 Number of paid entrances to hikes is growing rapidly on Faroe Islands. Local residents were taken aback by the boom in tourism a few years ago, so they want to get something out of it and, second, reduce the impact of massive traffic on the fragile landscape. This is why we have to pay the bold amount even at the most amazing place on the islands, where lake Sørvágsvatn is separated from the sea by a narrow, steep cliff, so that the nearby short, massive waterfall plunges down into the sea. The whole thing looks like some gigantic optical illusion, we just have enough of it. To finish up the trip in a nice way, a heavy rain is triggered on the way back that lasts few kilometers in the dark. 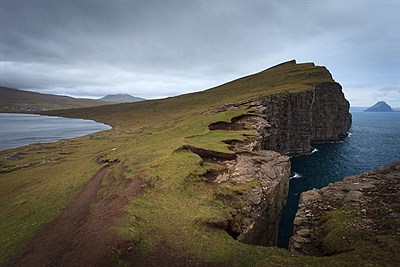 After a nasty rainy first night, the weather remains relatively calm, so it will remain for the rest of our stay. The next day we plan to visit the capital and the ancient village of Saksun, both on the neighboring island of Streymoy, which can be reached comfortably by an underwater tunnel. A few years ago we would have to use a ferry. We are thrilled by the capital, we park about 100 meters away from the Ministry of the Interior, and after a gorgeous coffee at a local business overlooking the swaying boats, we take a tour through the historic government district. On the contrary, the village of Saksun is one big disappointment. It does not look like in the photos, which attracts its visitors. Secondly, there is a paid, but broken access to the ocean, which not only withdraws money from the card twice, but it sticks us in a cage in which even the laying hen would feel uneasy. Thirdly, my shoe tears apart, so the rest of the holiday I have to use the other pair of shoes comfortable at home, not here. In the afternoon we improve our day by cooking pasta in the village of Tjørnuvík on the northern tip of Streymoy Island. If one can say that there is an end to the world, it is Tjørnuvík. In the evening we cross over to the neighboring Eysturoy, where we stay in a camp on a football field on the northern end of the island. 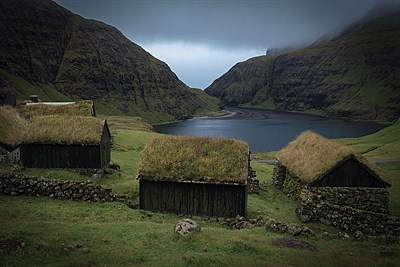 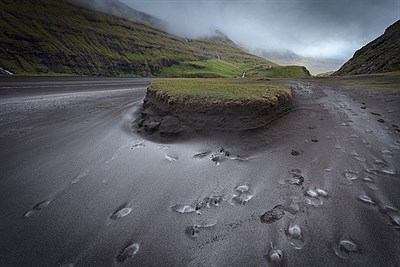 The camp is full of pleasant people. We offer a German hitchhiker a ride from the camp to the starting hike point to the nearby highest mountain Slættaratindur. Together, we take a fairly undemanding climb, spoiled only by strong wind and mainly fog. However, after less than half an hour waiting for the top, the fog melts away and we have a wonderful view of almost half the area of the archipelago. In the afternoon we take a trip on grassy slopes high above the ocean in the vicinity of the beautiful village Gjógv, where I am amazed by a waterfall flowing from the middle of the steep cliff directly into the sea. We finish the day by taking pictures of the beautiful Funningur Fjord. 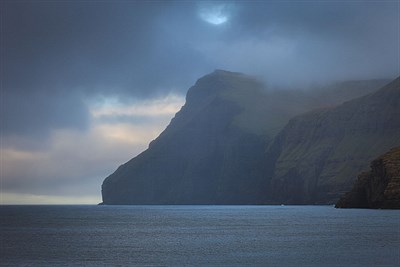 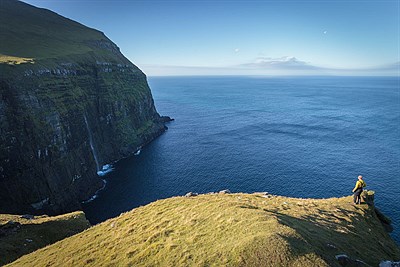 After another night in a popular camp, we cross the tunnel to the island of Borðoy together with our popular hitchhiker. The landscape is changing towards east, the islands are smaller and steeper, separated by narrow canals. It all resembles Norwegian Lofoten. On the island of Kalsoy, we head for the northern tip, staying overnight at the lighthouse with a beautiful view of the sea and the surrounding cliffs. Evening at the lighthouse is amusing, we watch the instagram couple with the radio headsets for hours, arranging systematically at a distance casual moments from nature. Night on the cliff is unusually calm. There is no wind, so we can sleep even without tents. 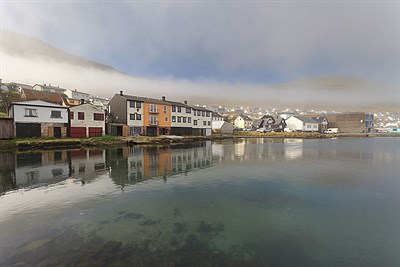 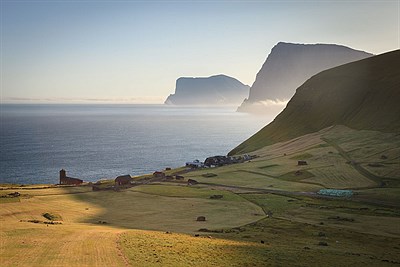 The next day we make our way to the last, almost easternmost island of Viðoy. At the church in the village of Viðareiði, which, although almost 20 meters above the ocean, was once swept away by a storm wave, we turn back towards the capital and the airport. On the way back we make a beautiful crossing of the ridge from the village of Saksun to Tjørnuvík, we spend time in cozy local cafe and finally tear the tent while building it in very windy weather near the airport. 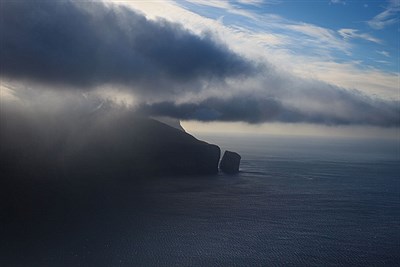 I was excited as a photographer from the Faroe Islands. The landscape is truly incredibly epic and is photogenic in any type of weather that also changes very quickly. I hope that I will happily visit this country once more, preferably at a time of snow cover. However, it is relatively rare here and can be expected to become increasingly rare in the future.